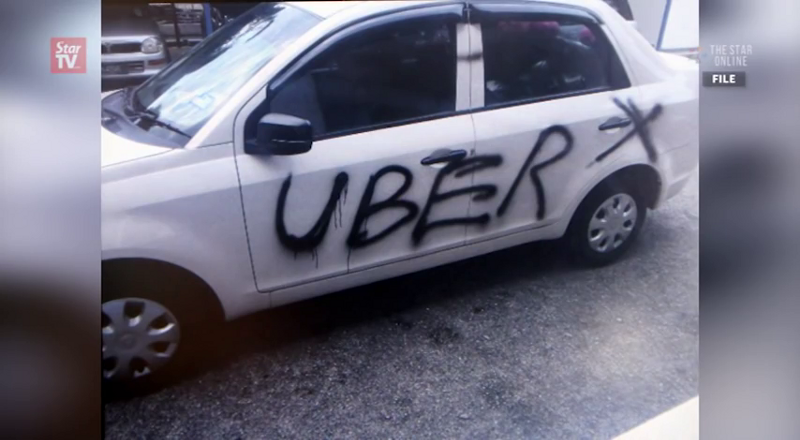 One year on, the battlefield has transformed. Not content with mere protest to the government, the taxi drivers are starting their own guerilla campaign. MyTeksi (a.k.a GrabTaxi) are also now seen to be on the same side with Uber as they start to expand their GrabCar service. On top of that, SPAD (Land Public Transport Commission) brings out a new regulatory weapon that can substantially threaten the viability of both Uber & GrabCar business model.

Battle of Hearts and Mind

Uber know the perception game very well, they are careful to portray themselves as crusaders providing better service as alternative to the wretched taxis. Quite a number of customers are now a convert and vocally express their support for Uber via social media.

Cornered by higher cost, reduced income and regulators apathy some taxi drivers are taking the matter in their own hand. Their guerilla warfare had caught both Uber & GrabCar drivers. Being caught now means serious trouble for these freelance drivers if they don’t have the proper Public Service License.

They are not facing mere fine which can be paid off — which Uber readily pay for their drivers in France. Instead they are now threatened by a more sinister threat — being barred from renewing their road tax. This essentially ‘brick’ their car and made it illegal to drive it for any purpose on the road. Bricking a $500 smartphone after jailbreaking it to use it on another carrier is painful enough. Imagine bricking your $35,000 car for signing up on Uber & GrabCar network.

That is the pain the licensed taxi drivers wanted to inflict upon these ‘illegal taxis’. They don’t care if their own image is tarnished by their rather barbaric and vandalising tactics. What’s clear to them is that Uber & GrabCar are a threat to their livelihood and must be stopped. They are even resourceful enough to use their enemy’s app to stalk the cars.

It must be tough for Uber to swallow their own medicine served cold by the taxi drivers. Uber had been known to be sabotaging other ride-sharing provider such as Lyft to poach their drivers. It is also aimed to inflict financial losses by deliberately ordering rides and cancelling them at the last minute. They even stalked journalist and threaten them.

Some brilliant minds at SPAD had also hatched a new strategy to nab Uber & GrabCar drivers. Instead of hitting the streets, they combed digital logs and photographic evidence to identify the drivers and summon them for ‘interview’. If they ignore the summon, they still can be barred from renewing their road tax — effectively bricking their car before the jailbreak has ever been proved.

Startups Are No Saint

Last year, GrabTaxi sided with the taxi drivers. They issued a statement to their drivers regarding an impending ‘threat to our livelihood’. There’s no mention of Uber by name but the phrase ‘We shall face this giant head on as One, showing them the indomitable Malaysia Boleh spirit’ is a dead giveaway. They even co-opt the ocassion of Merdeka to galvanise their warcry.

Fresh from USD250 million funding round from SoftBank Corp, GrabTaxi announced a USD2.8 million welfare fund to help taxi drivers in January 2015. At this point it seems that GrabTaxi are serious in both helping the drivers and providing better services to the customer.

In contrast, Uber are increasingly under scrutiny for conveniently classifying its drivers as independent contractors. They stand to gain from services rendered by the drivers yet deny any responsibilities of any harm inflicted when the drivers are serving their ride network.

But now, even GrabTaxi idealism seems to be in question. They keep on expanding GrabCar service that cannibalize the regular taxis which supported their meteoric rise in the first place. Uber are even more blunt, stating that they’ll discard the drivers once autonomous car technology are mature enough.

A Revolution Is Underway

What are witnessing now is just the tip of the iceberg of an economic revolution in progress. The top down Industrial Revolution are now crumbling under the pressure of the networked Digital Revolution.

It is inevitable that taxi companies must change. They can’t go on having a protected business model while at the same time squeezing the taxi drivers to fork out daily rent fees. Cab-hailing apps are here to stay and drivers need to be able to obtain their licenses individually.

The new can be exciting but beware the rebel might be even more tyrannical than the despot they disposed of.